Italian actress Arianna Pollini was on the set of Madame Solario, directed by René Ferét, a French-language adaptation of Gladys Huntington's bestselling 1956 novel.

Did you know the novel?

Arianna: No and I didn’t read it after the shooting. I didn’t know it had been translated into Italian.

Was it your first experience in a period film?
Yes, and I was glad to have this chance because I was often told that my features remind those of a woman of the early 1900’s. As soon as the director saw me, he saidI was perfect for the part. Then I had long curly hair, ideal for the fine and voluminous hairstyles inspired by the paintings of the Belle Époque, elegant coiffures with cute hats hold by hatpins. Many dresses were real period clothes, frail and ethereal silks. So, in addition to the effort of wearing a corset, I was also worried and felt responsible for these delicate clothes. At the end of the day, when we finally could take off the corset, we started to breath freely again.

What was your role?
I was the Marquess de Florel, an Italian woman married to a French aristocrat. She was not as refined as the high society around her and had a sort of “free” relationship with her husband, with a tacit agreement that allowed them to have affairs. My Italian accent was perfect for this role. On the whole, René Féret has chosen an international cast in order to match all foreign characters and their exotic accents. 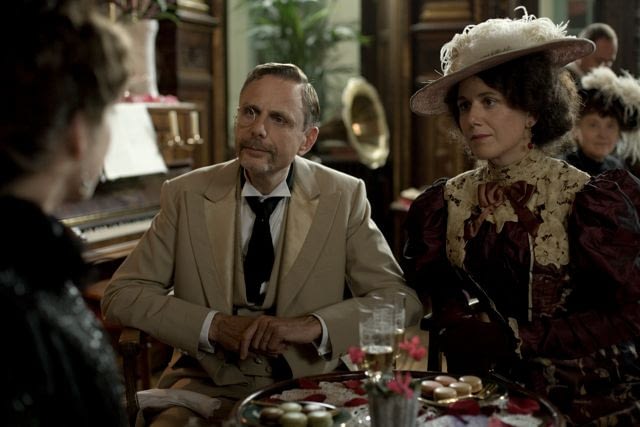 The novel is set in Cadenabbia, for the most part at the Hotel Bellevue. Does the film respect the original setting?
For the outdoor filming the main location was Villa Monastero in Varenna, and also Villa Serbelloni, the sanctuary of the Madonna del Soccorso and a private villa in Bonzanigo. The interior scenes were filmed in Paris, in a private club on the Champs Elisées with period furniture and decorative objects. The club looked like a hotel, with a large lobby and monumental marble stairs to the upstairs rooms. A few scenes were filmed in Cardano, near Grandola, a beautiful little hamlet with a small square.

The cast was international. How was the atmosphere?
It was really friendly. A few of the French actors had already been working with the director, the others were of foreign origin like the characters they played. Everybody was kind and easygoing, especially René Féret who unfortunately died last year.

Was it difficult for you to play the role of an early 20th -century lady on vacation on thelake?
As soon as I put on period clothes and corset, I identified with the role. After all, I am used to play different roles, I am an actress. In fact, my real problems were of a different kind; I had to understand what everybody was telling me (in French), I had to learn to text and I was worried about my French pronunciation. In the movie, the role of my husband was played by Christophe Rossignol, who is a producer and not only an actor. He has produced important movies like Hate (1995), Irredeemable (2002) and Welcome (2009). So I felt honoured and rather thrilled to be part of such an exciting milieu and to play with an important filmmaker.

Madame Solario is one of the many movies that have been shot on lake Como. How did local people react during the filming? Was there any interest or curiosity around the set?
The few locals involved with the set were very friendly and helpful, but there was no real contact with local people because the set was somehow secluded, away from the normal life of the villages. No scene was shot in a public square where people usually hanged out. I think that even among the extras there were only actors, mostly French, and almost nobody from the area was involved, or just somebody with peculiar features that struck the director and for this reason was chosen.