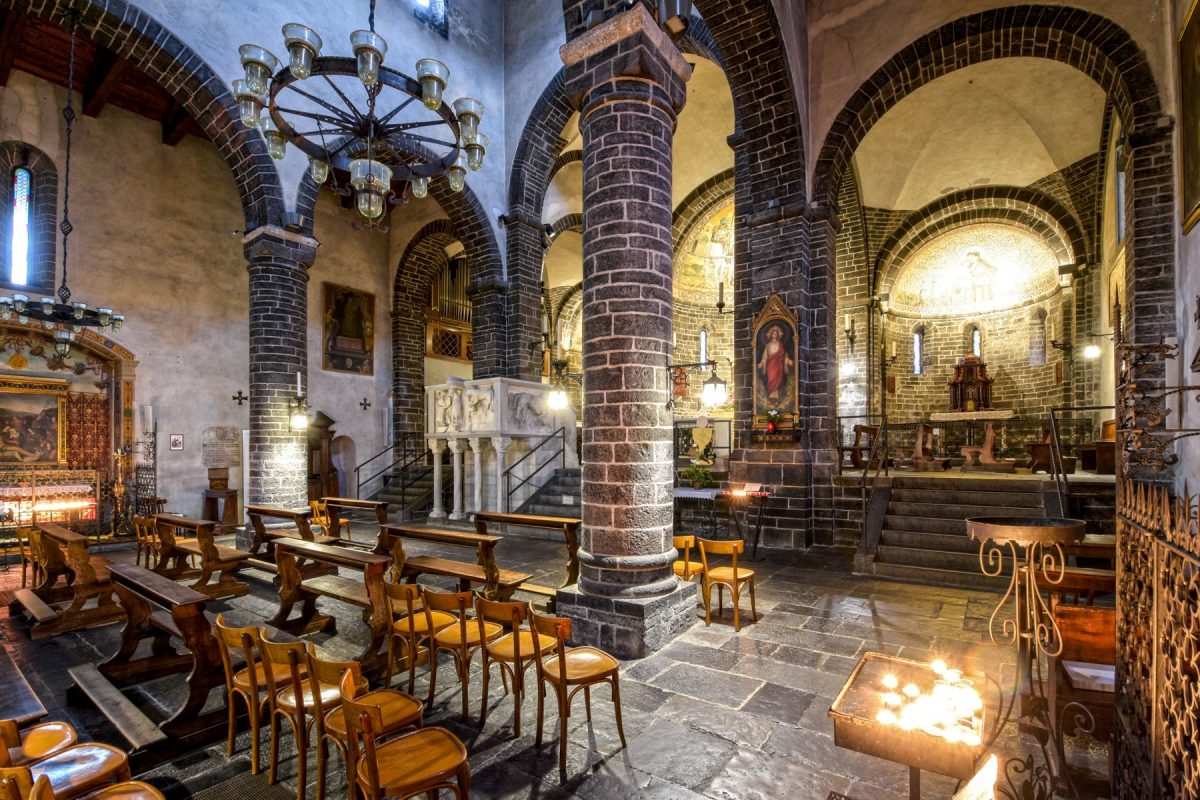 Wonderful example of the Romanesque-Lombard art (12th century) built between 1075 and 1125 by the Comacini Masters.

Inside there are mosaics from the early 20th century, a rich altar from the end of the 16th century, the “Deposizione di Cristo” by the school of Perugino, the archaic Crucifix from the 12th century, the triptych by Foppa (1432), the “Cristo deposto” statue in polychrome wood from the Spanish-Baroque school.

The Romanesque origin of the church of San Giacomo is testified by its external appearance which, despite being partly a twentieth-century remake, reflects the characteristics of the Romanesque architecture of Como.

The salient facade, in grey stone like the rest of the building, reveals only in part the internal division into three naves: only two, in fact, are the visible parts, while the third is hidden by the mighty sixteenth-century bell tower that stands on the left, in a more advanced position than the rest of the structure.

Moving backwards you can see the three apses.

As soon as you enter the building you can see on the right of the counter-façade a canvas depicting the Holy Family.

Along the wall of the right nave there are some paintings depicting Saints and the Virgin.

The top chapel is decorated with a recent mosaic depicting Sant’Antonio from Padova. Other mosaics decorate the main apse (Martirio di san Giacomo), characterised by the presence of the gilded wooden altar by the sculptor Domenico Pini, and the left one (Sant’Orsola e compagne). The presbytery area is also marked by a wooden crucifix on the access arch.

Proceeding along the left nave, from the presbytery towards the counter-façade, you will meet:

The current church is the result of changes over the centuries. The original structure was built between the end of the eleventh century and the beginning of the twelfth. During the seventeenth century, St. James became an independent parish from the of San Giovanni one: just on that occasion some renovations that strongly altered the interior were carried out.

Only at the beginning of the twentieth century could a restoration attempt be made to restore the church to its original appearance, eliminating subsequent additions.

Tower of the Arts of Bellagio

Castles and Fortifications
Bellagio
Tower of the Arts of Bellagio