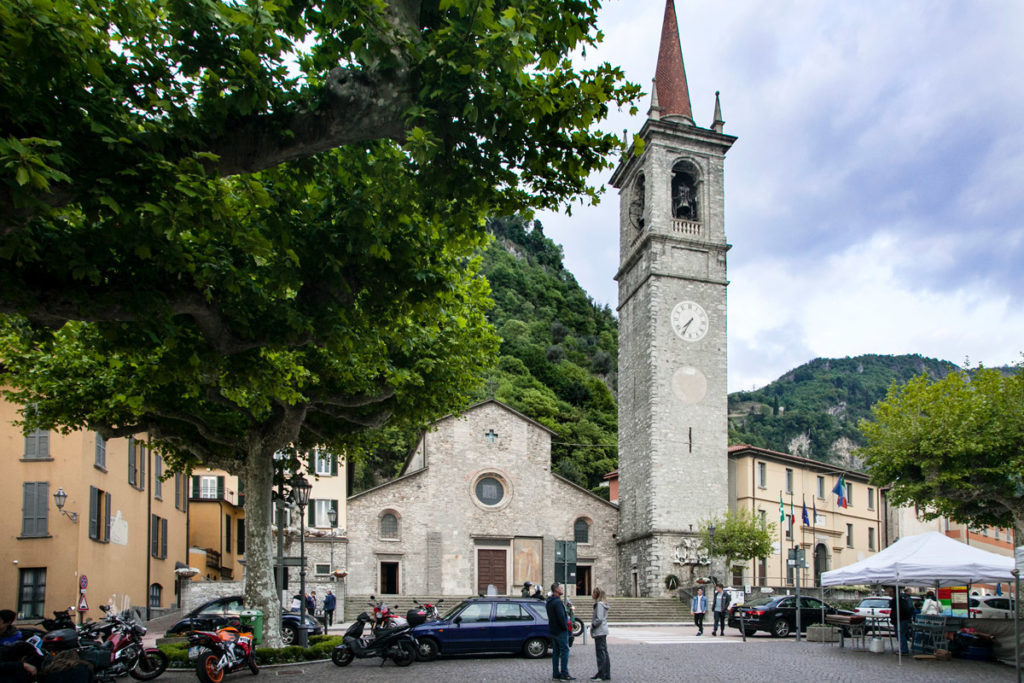 The parish church of St. George dates back to the 13th century and it is located in the square of the same name in the centre of Varenna.

Built on a small temple dating back to the 12th century and reworked in later periods, it was rediscovered after several restorations in the second half of the 20th century as an example of Lombard medieval architecture.

The salient facade reveals the internal structure with three naves, of which the central one is higher than the other ones. The rectangular plan has no transept. The vaults of the central nave are supported by two rows of three circular pillars placed on a square base, while those of the aisles are supported externally by cone-shaped corbels resting on the perimeter walls and are called “hanging” vaults. Next to the central apse there are two side chapels. The interior space is divided into four bays each illuminated by a single lancet window, but there are traces of the ancient small and narrow windows with a round arch, datable to the late thirteenth century. At the centre of the façade there is a large circular oculus, closed by a glass window. To the right of the central door is the fresco representing Saint Christopher, protector of the ferrymen.

In 2001 the church underwent a restoration focused on the reconstruction of the roof which was deteriorated due to numerous infiltrations which damaged the plaster.

Inside the church are preserved some frescoes dating from the thirteenth century. on the counter-façade we can see a scene from hell with Satan holding the Antichrist in his arms and devouring the souls of the damned. On the columns at the sides of the high altar are painted two figures: on the right a saint in bishop’s clothing, on the left a saint crowned. The two figures can be identified with Pope Gregorio Magno and Queen Teodolinda, who was particularly venerated in the area, because, according to ancient tradition, had chosen as her last home the Vezio Castle, which stands on the promontory above Varenna. At the bottom of the right side chapel there is a series of saints and bishops dating back to the thirteenth century, framed by floral decorations alternating with crosses.

Inside we can admire the Polyptych of St. George by Jo Pietro de’ Brentanis (1467), a local artist who is part of the Giottesque art of upper Italy. Composed of three panels and seven panels of different sizes, it represents the Virgin seated on a throne with rich golden drapery and red flowers, who with one hand offers a fruit to the Child, who stands on his mother’s knees, with his right hand raised, blesses. To the right of the Virgin stands St. Peter M. of Verona, and to the left, St. George. On the sides there are four tablets: S. Lorenzo, S. Jo Battista, S. Stefano and S. Agnese. At the top three other tablets: in the middle the Crucifixion, on the left the Archangel Gabriel and on the right the Annunciation.

The altarpiece dates back to 1533, the work of the Como painter Sigismondo De’ Magistris. It represents Jesus kneeling on a stone emerging from the waters of the Jordan River with his hands united in prayer, while St. John the Baptist pours with his right hand on his head, the water, assisting the angels. all is framed in a landscape that has strong calls of Leonardo and Gaudenzian lines. The base of the frame represents the Virgin Mary with the Child in her arms; two angels support the mantle of the throne on which the Virgin Mary stands. On the sides of the angels there are two saints: a male figure with armor and palm; a female figure with a chalice from which a snake emerges.

Polyptych of the High Altar

The Polyptych of the High Altar, dating back to the 1500s, is a composition of wooden tablets, leftovers from a polyptych by an unknown artist. It was the altarpiece of the high altar at the time of St. Charles, when the intervention of the Archbishop, in a decree it was established that The wooden altars were to be removed and the marble altars made. The frame was then sold in the middle of the 18th century and the tablets were partly kept in the Archive, partly above the furniture of the Sacristia and partly in the attic.

Polyptych of the Saints

The Polyptych of the Saints is a very complex altarpiece that unfortunately has been reduced compared to the original. It dates back to 1594, by an unknown author and comes from the lot of sacred elements released by Kess when in 1899 he wanted to get rid of the old servants that the parish still had on the church of Villa Monastero. Four saints are represented: St. Catherine of Alexandria and St. Lucia on the left, St. Mary Magdalene and St. Apollinia on the right; on the base are portrayed the twelve Apostles with the Lord. In the centre there was a statue, and not a painting as one might think, which is now kept in S. Maria delle Grazie.

The Confessional is the work of Giovanni Albiolo from Bellagio and dates back to 1690. It has a walnut wall structure with three arches with 4 caryatids carved on the face of an angel with festoons of flowers and fruit. On the selvedge, a painting with two caryatids and a panel with the Risen Jesus and Mary Magdalene leading to the sepulchre, a small bowl of perfumes and even more above it there is a skull with the triregnum and two angels at the sides. On the corners there are two statues depicting King David and the prophet Elijah.

The Stone Group of the “Pietà” or ” Compianto”

Above the walnut portal overlooking the sacristy, we note the Stone Group of the “Pity” or ” Mourning” dating from the late 400s, stone sculpture in which the face of the Virgin Mary is central and the arms of the dead Christ divide the picture in a longitudinal direction, while the three Maries and Nicodemus with their faces marked by pain seem to enclose this Mystery with their bodies. The two side figures of Joseph of Arimathea and St. John are spurious.

On the north wall of the church is the Baptistery, a niche with an inlaid black marble basin surmounted by a walnut ciborium and small briar doors. Two light balustrades in Varenna marble, inlaid with iron mirrors, close the area of respect. Wrought iron gate.

The Sacristia, on the other hand, dates back to the middle of the 18th century and represents a true jewel of Lombard craftsmanship.

The Bell Tower was finally completed in 1653. The trunk is massive as if it were a tower; the corners are made of exposed stone, while the filling masonry has no peculiar characteristics and is interspersed with brickwork; a double edge with an interposed band separates the trunk of the belfry that stands on four corner pinnacles with the arched round arches in the middle, parapetted with an elegant balustrade with columns; the top is finished with four corner pinnacles of pyramidal type with a ball at the top; the conical spire is made of brickwork with a diamond surface and ends with a sphere of copper with the cross superimposed.

The church was probably built in three phases, as can be seen from the composition of the pillars. In fact, they are made of stone in the lower part and brick in the upper part, revealing a cut-off of the construction work of the church. The first phase, in fact, can be dated back to the first decades of the thirteenth century, when the stone trunk of the pillars and the perimeter walls were erected. The brick walls, the arches of the naves and the brick end of the pillars are from the late thirteenth century. Finally, the third phase dates back to the 14th century, when the ancient wooden upholstery, of which the frame and the attachments on the walls remain, was replaced with a vaulted masonry upholstery. The oratory can therefore be dated between the thirteenth and fourteenth centuries, even if the first certain information dates back to 1313. The construction of the sacristy and bell tower dates back to the second half of the fifteenth century.

The current high altar, inaugurated in 1822 after 16 years of work, is in Baroque style, with a table in black and red marble and inlays. The tabernacle is in neoclassical style. It is particular, moreover, the paving, entirely realized in black marble of Varenna.

Sorry, there are currently no upcoming events at Church of S. Giorgio.