A mountain walk suitable for the whole family, perfect for those who want to enjoy a splendid view of Lake Como, without making too much effort.

The walk that leads to the church of San Martino (472 m), located in a panoramic position above the village of Griante, is suitable for all seasons and within reach of all, even if entirely uphill.

The (little) effort required will be rewarded by the breathtaking view that ranges from the village of Griante to the promontory of Bellagio and the branch of Lecco, with the mountains that slope down to the lake and the Grigna massif in the distance.

The walk starts from the town of Griante, reachable by car along the SS340 to Cadenabbia and then taking the detour that goes up to the center of the village (about 31 km from Como and 37 km from Colico, parking in Via Brentano), by bus C10 or lake by boat or ferry (from Bellagio or Varenna), getting off at the stop Cadenabbia.

Itinerary from the embankment of Cadenabbia (about one hour)

For a long time Cadenabbia was one of the favourite holiday resorts of the English who settled here and founded a community so important as to induce them to build the Anglican Church of the Ascension, the first in Italy, which was consecrated in 1891.

To start the walk, take the small road on the right side of the Hotel Britannia and then climb the stairs (via Mazzini) on the right. Cross the asphalt road near the town hall and continue along via Franzani. Turn right following via Tommaso Grossi and pass the parish church of SS. Nabore e Felice built in the first half of the 18th century. If you come by car, from the car park continue along via Brentano and then turn right to join the walk.

Just before the portico leading to the historic centre of Griante, on the left, there is the house where Achille Ratti (there is a plaque on the façade), pontiff and famous mountaineer, stayed for many years during his holidays. We now enter the old town where we recommend wandering through the alleys to admire the beautiful palaces of the seventeenth and eighteenth centuries. At the end of the old town, there is the Oratory of S. Rocco. From here you have to take the small road with the indication of San Martino. We have now reached Carsolina, one of the ancient hamlets of Griante, which owes its name to the karstic conformity of the land.

At the end of this small road we enter the hilly road that, since 1984, connects Cadenabbia to Tremezzo via Rogaro. At this point, if you decide to go back to Griante or to the lake, you have to turn right, otherwise you continue along the path until you reach the path that indicates San Martino. You will find it on the right and you can access it by going down a few steps that lead to a small bridge, across which begins the climb through meadows and woods. You are now in the middle of the Natural Oasis Park of San Martino, established to protect both the landscape and the local flora and fauna. Some protected species of birds of prey nest on the overhanging rock and, recently, the eagle has also returned to nest. 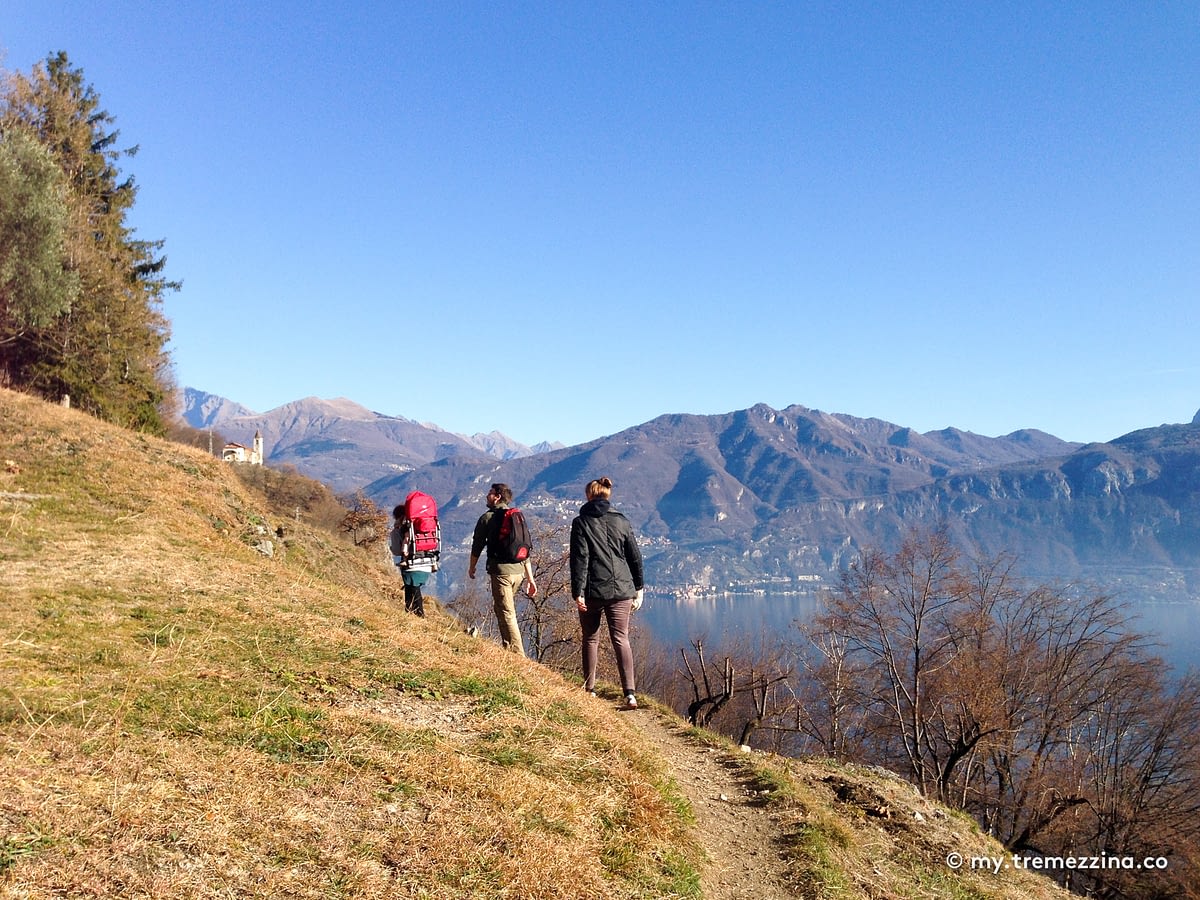 Along the cobbled path leading to the church there are several chapels with mosaic decorations, depicting episodes from the life of Christ. Halfway there is the Cappella degli Alpini, dedicated to S. Carlo. Inside, above the altar, you can see a painting depicting the saint, while on the walls there are images of the Alpine soldiers during the war painted by the painter Azimonti, a native of Menaggio.

Shortly after the Cappella degli Alpini, you leave the wood and at a crossroads turn right, leaving in the opposite direction the fork to the Forcolette. From here begins a long stretch halfway along a very scenic coast that leads to the fence that surrounds the grassy hill on which stands the church of San Martino, a real natural terrace overlooking the center of the lake.

The church of S. Martino was built in the 16th century. It became a venerated Marian sanctuary following the discovery of a fifteenth-century wooden statue of the Madonna and Child. Legend has it that in the seventeenth century the statue was found by a girl from the village in a mountain cave, where it had been saved a hundred years earlier by an inhabitant of Menaggio, when the village was devastated by the Grisons. When the news was brought to the village, the faithful came and transported the statue to the parish church of SS. Nabore and Felice, but from here it miraculously disappeared and was found again on the Sasso di S. Martino. This was interpreted as Mary’s desire to be venerated on the spot, so a niche was built first and then the current oratory. 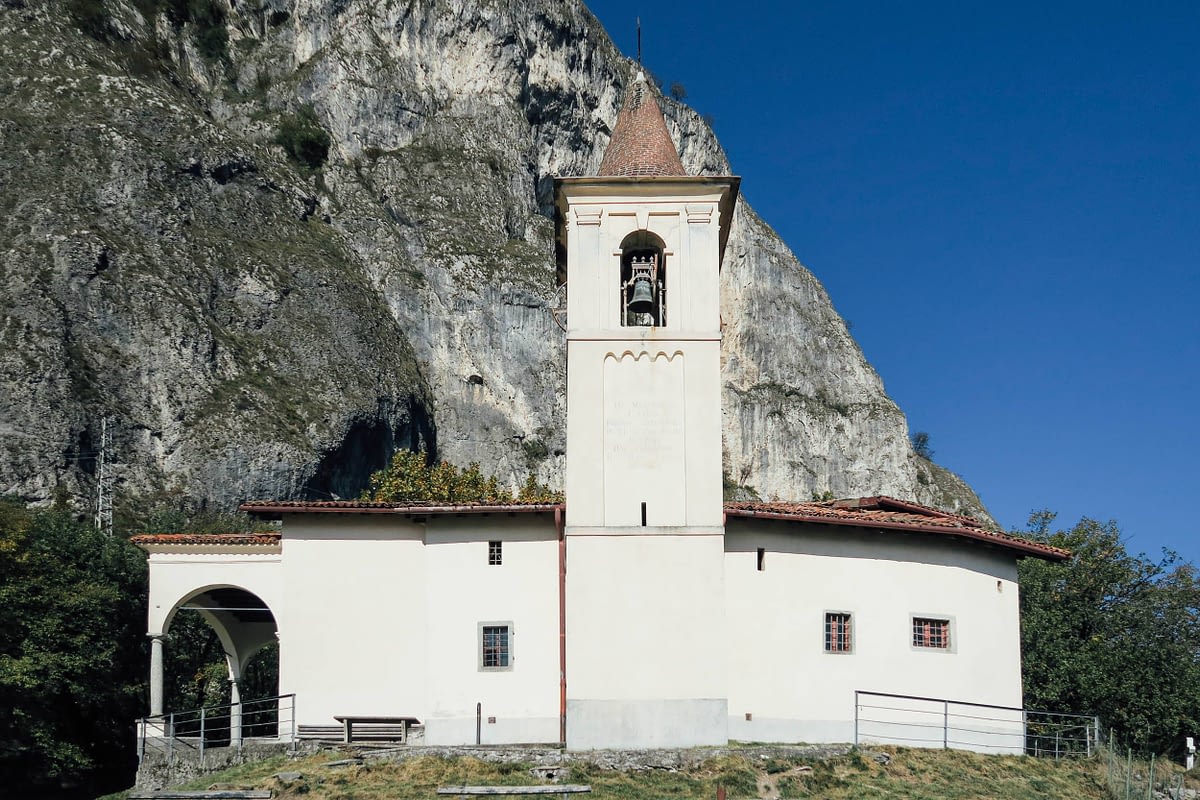 We recommend wearing hiking shoes, bringing water and a packed breakfast, on the left side of the church there are in fact picnic tables and a tree-lined area, on the other side you will find a sunny lawn, with picnic tables and benches, in a very panoramic position.