“What the word communicates through the hearing, icons show it silently”. This is the sentence that Flavio wanted to put near his tools and his pigments, in a pretty studio with light relaxing green walls. He likes this colour very much and he often uses it in the writing of the icons.

Flavio has always painted. As a boy, he loved bright colours, such as red and black, and landscapes and he used to hang his creations in the hen house. In 1999, the monks of the monastery of San Benedetto, where he lived until 2007, suggested him to do a course of writing of the icons in Venice with them. Out of curiosity, he decided to give it a try, and, nine days later, he came back home, in Ossuccio, with his first icon, the Christ Pantocrator, a present for his mother. Since then, Flavio has followed many other courses and has written over two hundred icons. 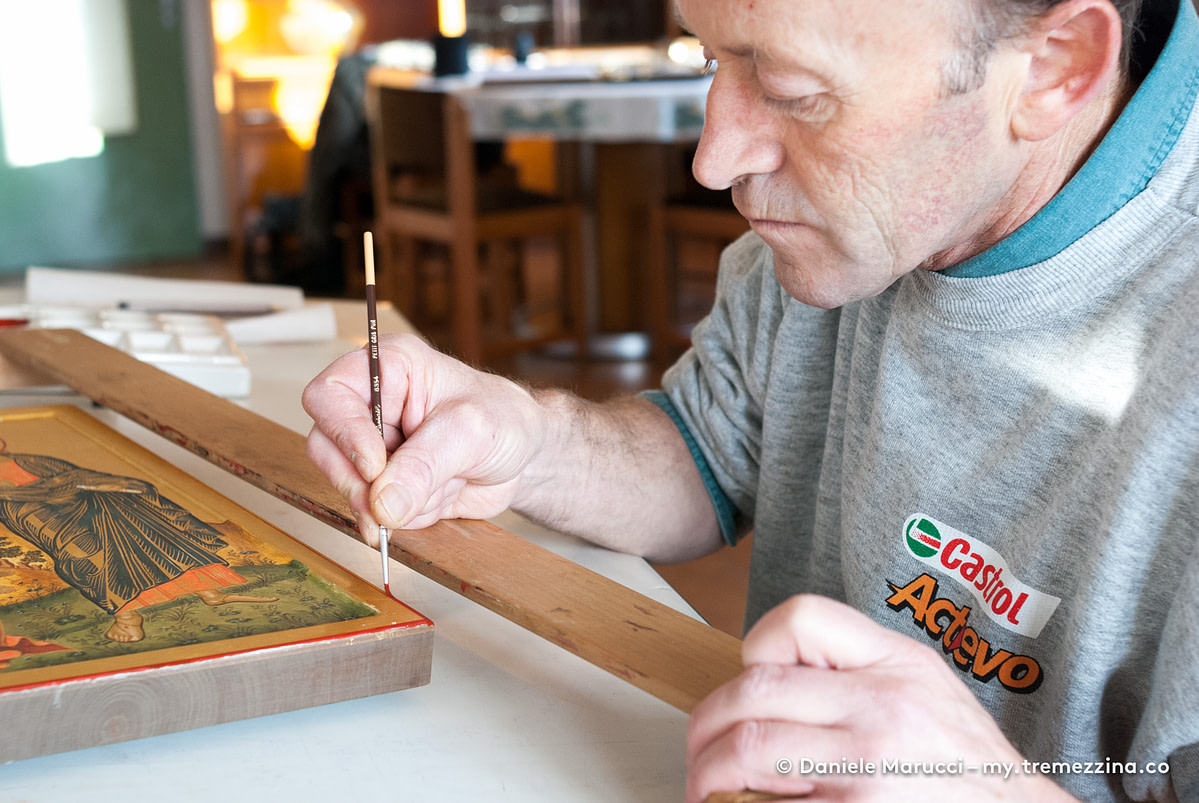 As it often came out during our conversation, the icons are not simple furniture, but sacred objects, holy, to contemplate and to turn to. In virtue of their sacredness, to create them you only use natural materials, such as egg-yolk, white wine and pigments of mineral, vegetable and animal origins. The icons language is extremely formalized and even the colours have a specific connotation: the red and the blue, for example, mean the earthly and the divine respectively. 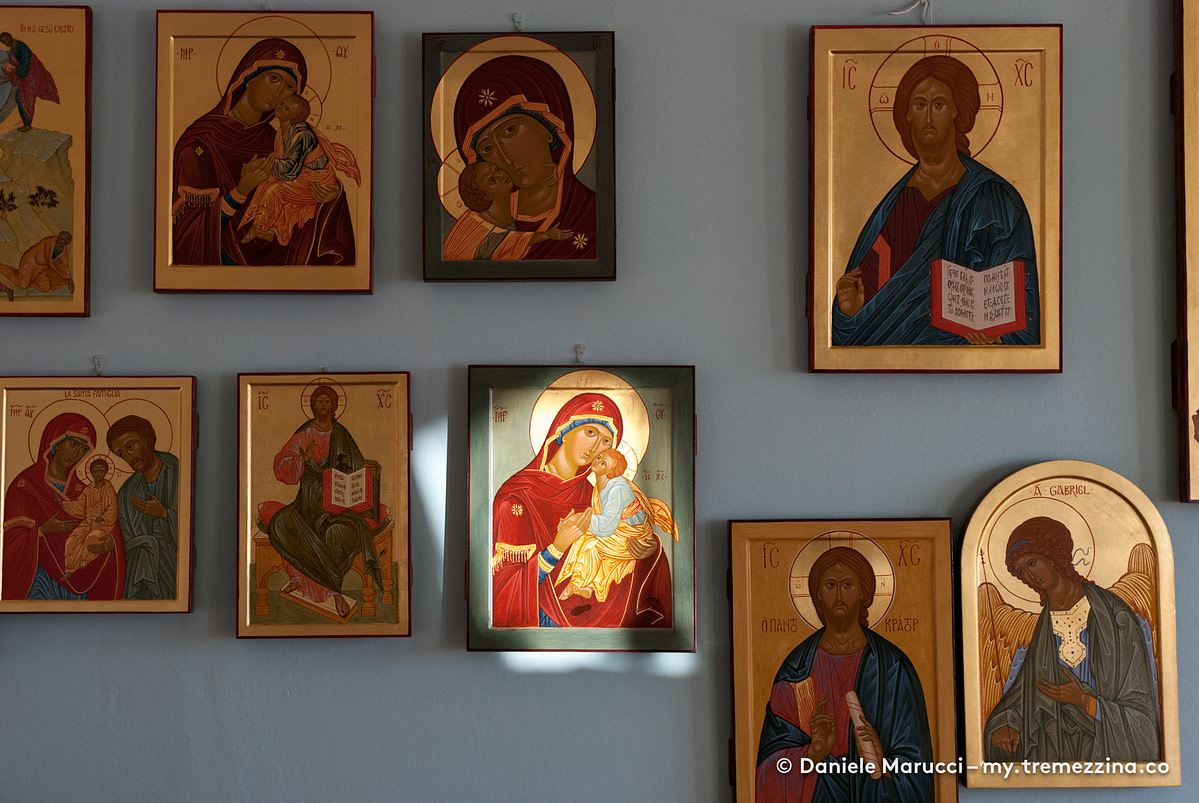 When I asked him if, as an artist, he felt restricted by the adhesion to a rule, Flavio tried to explain that writing an icon and reproducing a landscape are two totally different activities: “when you are creating it, the icon is much more engaging…it is some art you never finish learning…you never really feel successful…creating an icon is different”.

The writing of an icon is a very long procedure: the preparation of the panel, the addition of the gold, the drawing, the shielding of the parts that need colouring. The utmost satisfaction is given by the colouring: you start from the darker areas to the bright sections, of a pure white colour. It is a passage from the darkness to the light, the brightening gets narrower and the face slowly comes out, and Flavio deals with it calmly, as this is his favourite part, as well as the study of the eyes.

In an icon, the characters’ eyes are always absorbed, enigmatic. As Flavio explains, between a Renaissance Virgin with Child and an icon of the Virgin of the Tenderness there is a huge difference: while the first one is smiling, this last one “already knows about the destiny of his child and has a distant gaze, looking at the cross, and this is what it needs to pass on; it is much more intimate.

The difference between a painting and an icon is not only related to the style, the technique, but also to the artist’s predisposition. To make this concept clear, Flavio told me about when, in 2012, the Isola Comacina Cultural Association mounted an exhibition of the icons he wrote; for health reasons he couldn’t take part to the organization: “I experienced it looking at it as everybody else did and, at that moment, I understood that when you make an icon, you are just an instrument, not its creator”.

Regarding the intent: “you make the icons and you hope that they will be used, not just hung and forgotten”. In fact, once they are finished, they are blessed and displayed in church on holy days or in the houses and to them the faithful address their prayers. As Flavio tells me, according to the old parish priest of Ossuccio, don Romeo, praying in front of an icon has the same value as praying in front of God.

Thanks to this memory, I could fully understand the meaning of that sentence that Flavio wanted to put near his tools and his pigments: “What the word communicates through the hearing, icons show it silently”. 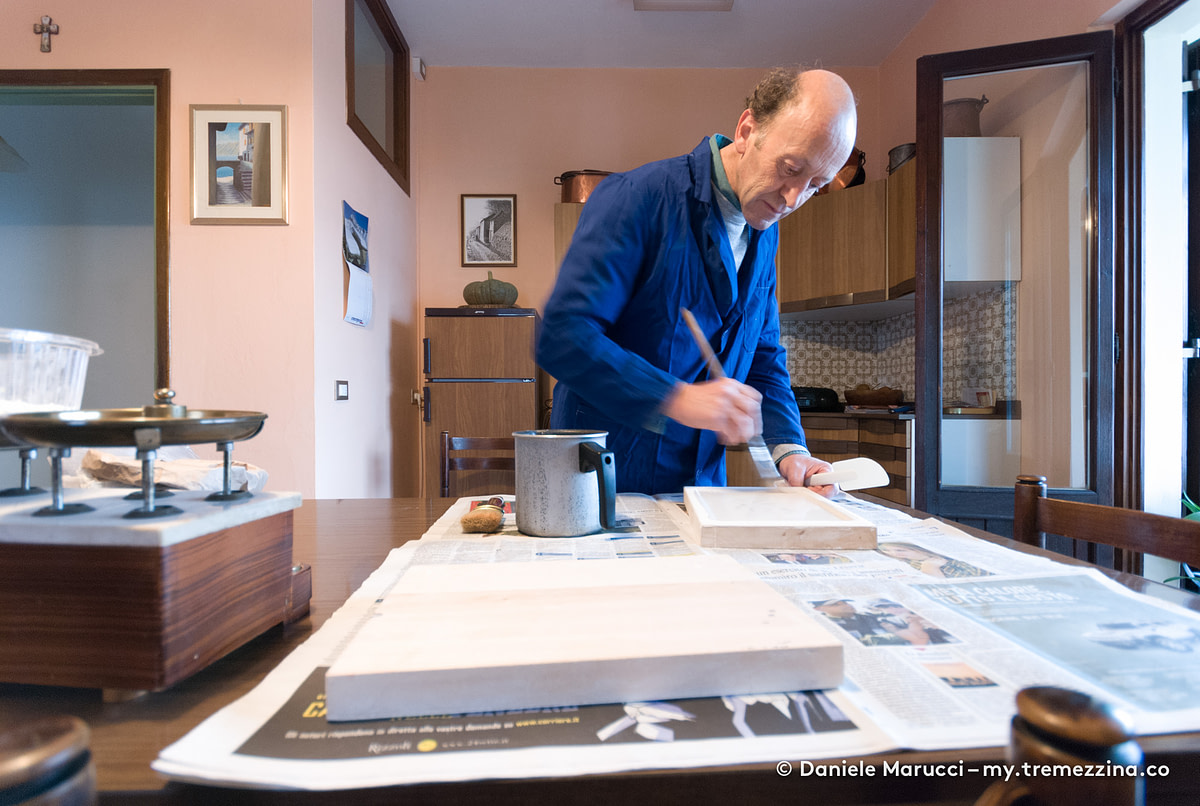 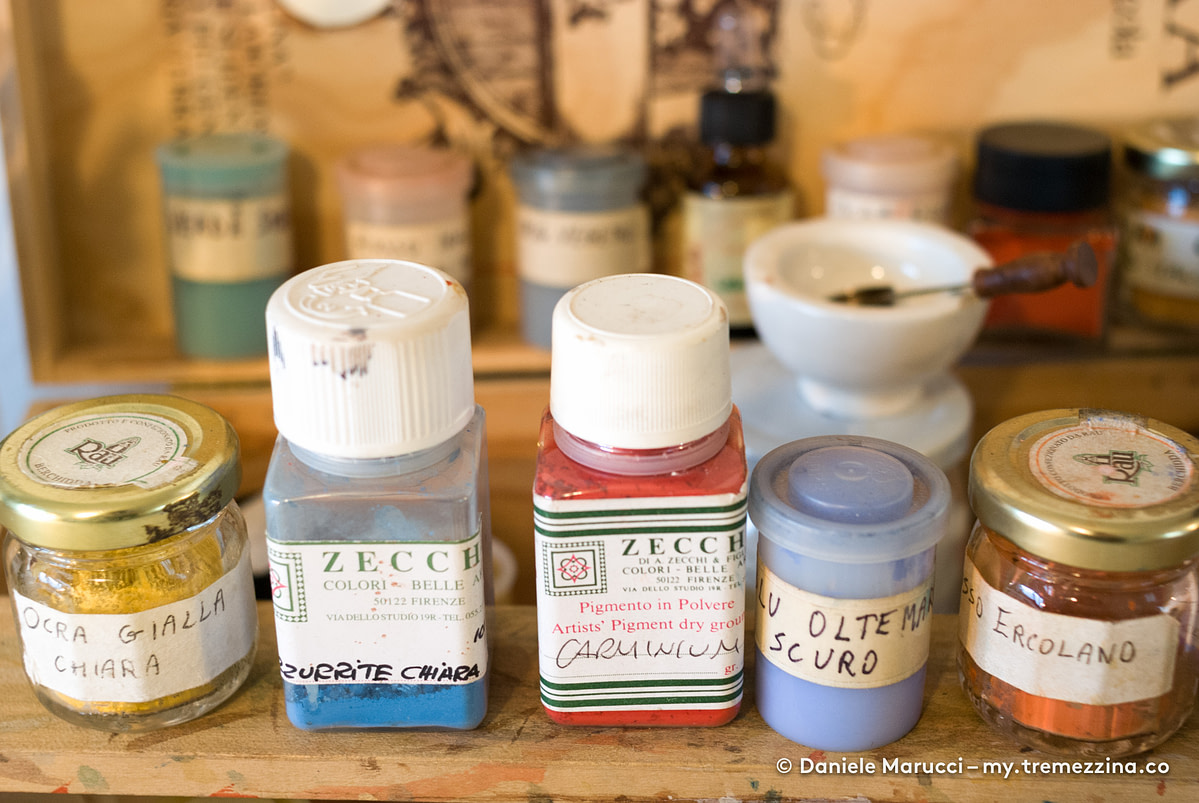 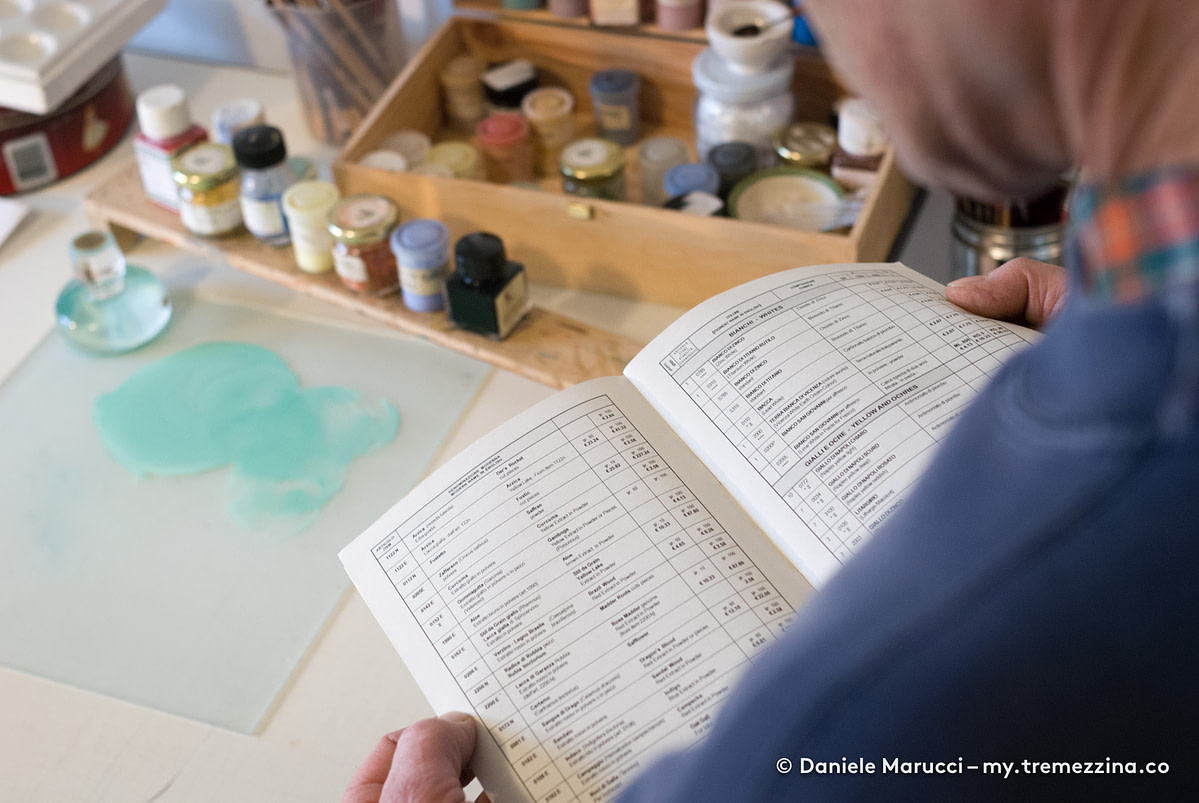 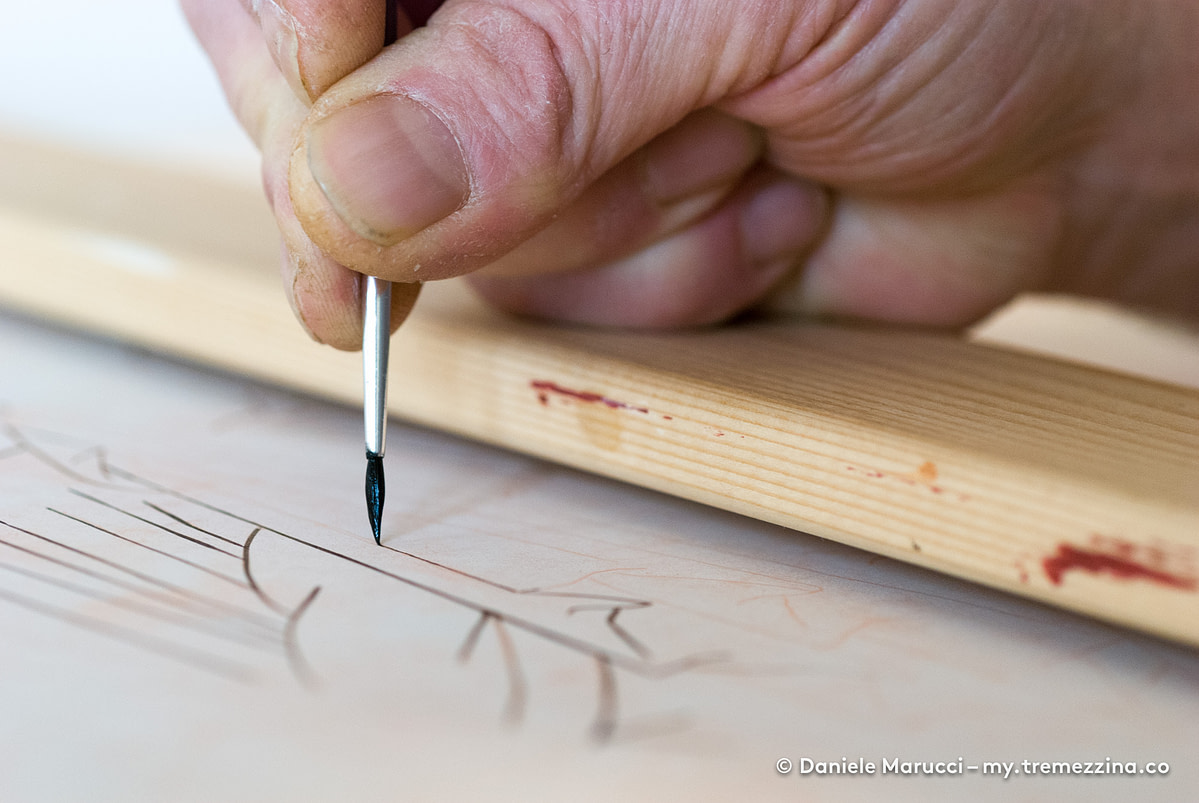 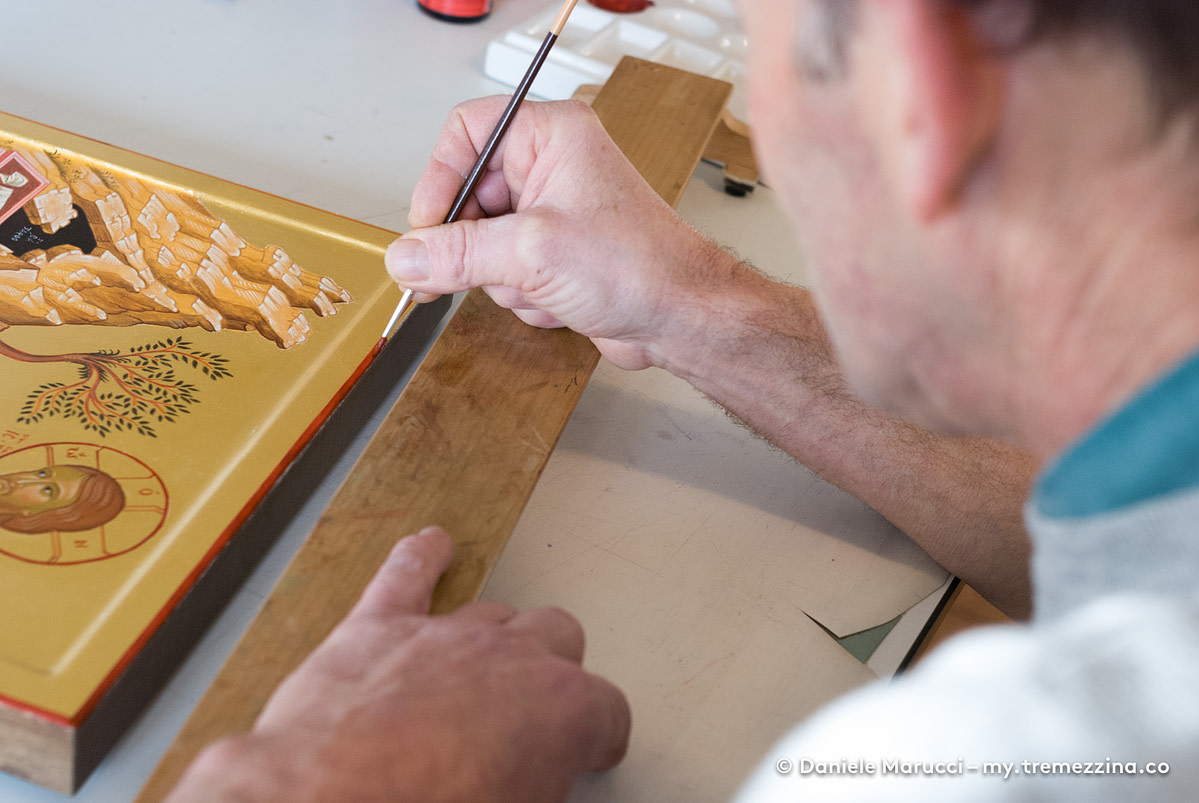 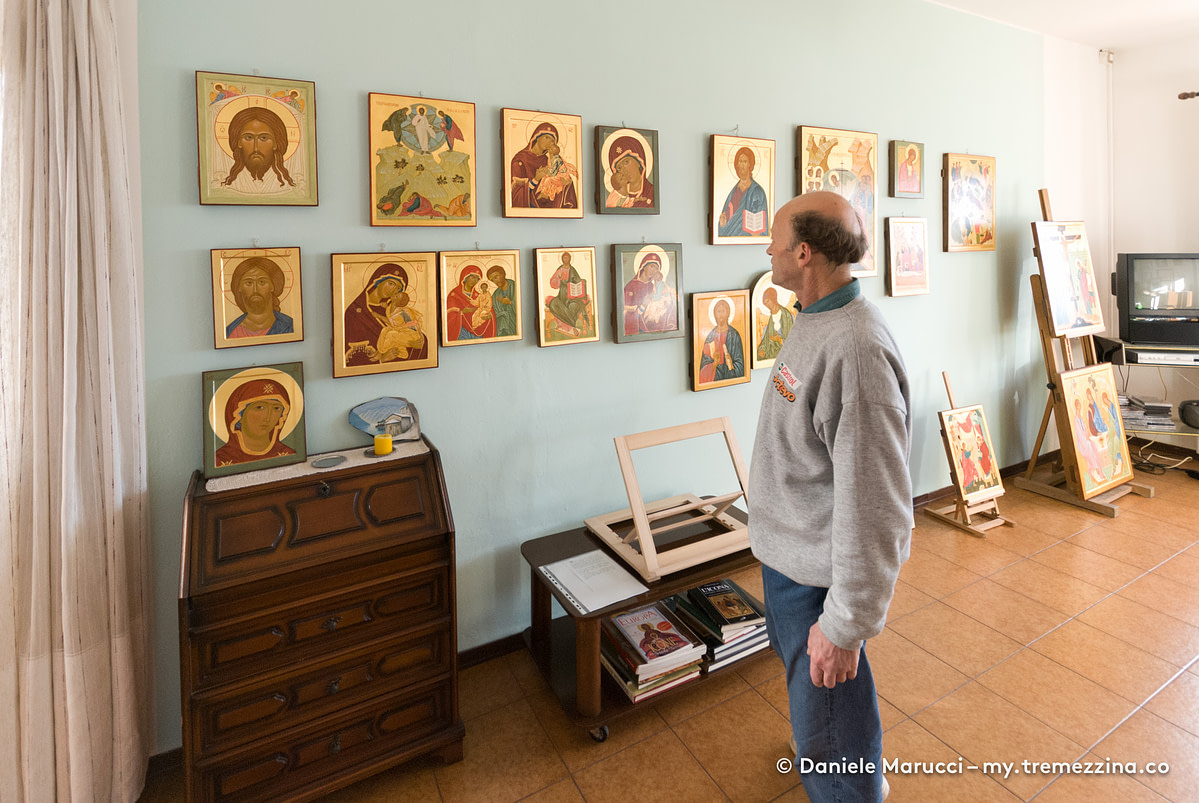 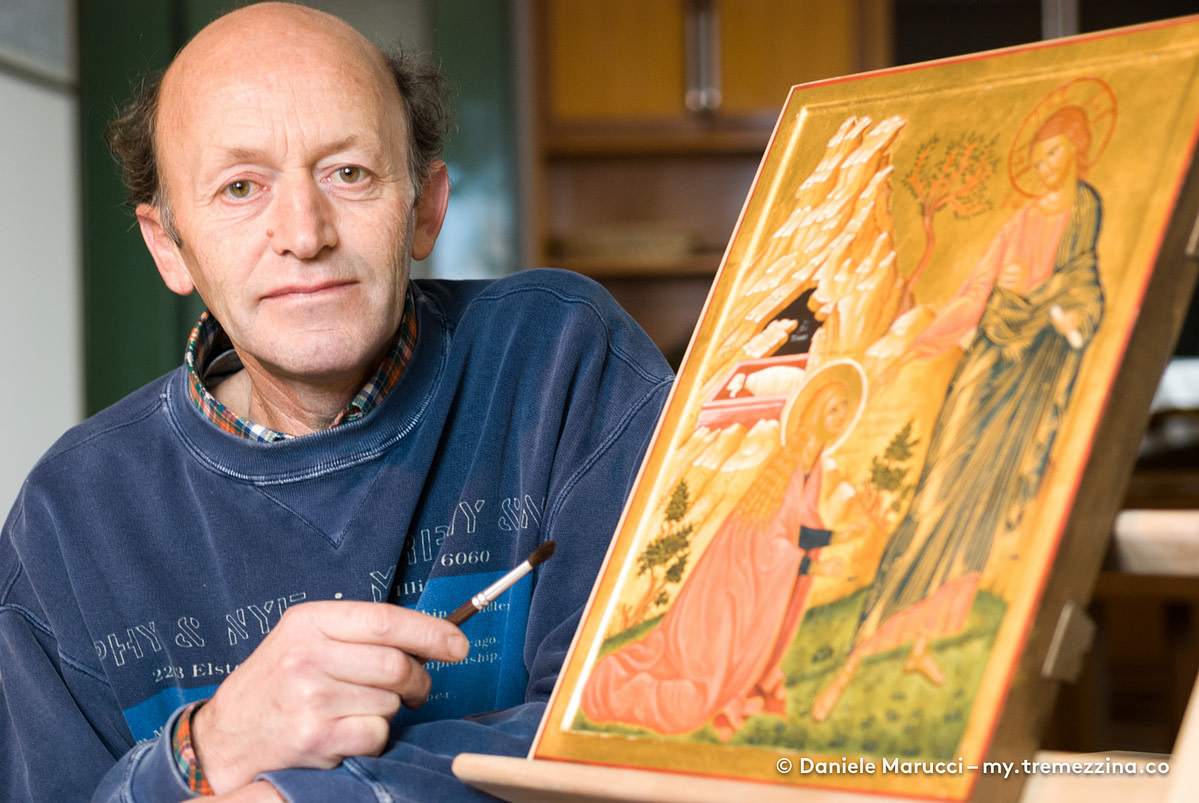