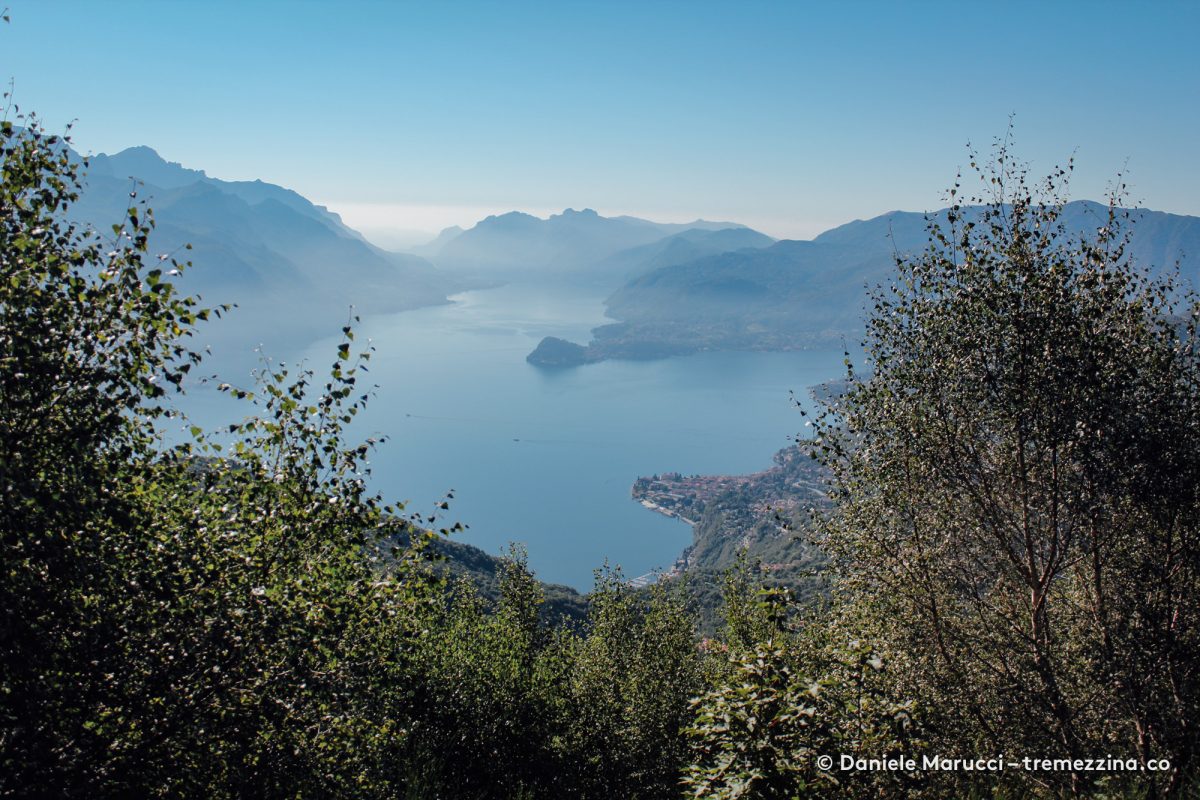 Walk to Rifugio Menaggio and surroundings

A balcony overlooking Lake Como, located on the slopes of Mount Grona. Splendid panoramic point and convenient starting point for many unmissable walks.

Rifugio Menaggio (1400 m) is a mountain hut situated on the southern slope of Monte Grona where it is possible to enjoy a spectacular view of Lake Como. From the rifugio you can extend your hike to Monte Grona (1736 m) and to Monte Bregagno (2107 m).

The rifugio provides refreshments and lodging and it is open daily during the summer – the rest of the year on Saturdays Sundays and Holidays.

From the bus stop at Breglia (749 m) cross the road and ascend the small road leading up to Monti di Breglia (sign indicating Rifugio Menaggio). At the second bend, just beyond a fountain, you will find the first short-cut on the right (sign Monti di Breglia/Rifugio Menaggio). The steep trail ends up on the road again, which you cross to pick up the next short-cut. After 20 m, at the high tension mast turn right. The steep trail leads to the road once more, which you follow for about 300 m. Then you find the next short-cut on the left which leads across a field. Cross the road another time and follow the trail through the woods which finishes on the road. You are now at Monti di Breglia (1000 m). After another 100 m you will reach a picnic area with fountain and a beautiful view (you deserve a rest). Here you leave the road and follow the trail over some rocks up to the left (sign). You reach the parking area of Monti di Breglia which you cross and then pick up the trail to the left. At the junction take the right (after heavy snowfall we raccomed the trail on the left). It leads among birch trees and broom up to the junction for S. Amate and Monte Bregagno. At this junction you have to keep the left. The now quite level trail leads along the slope of the mountain to rifugio Menaggio. The view embraces the whole central lake area with the towns of Menaggio with Monte Crocione (1640m), Bellagio with Monte San Primo (1682 m) and the Corni di Canzo (the two horns of Canzo) and Varenna dominated by the Grigne (2410 m).

Pizzo Coppa
Fifteen minutes from the rifugio there is a viewpoint called “Pizzo Coppa” from where you have a splendid view not only of Lake Como but of the whole Menaggio valley with Lake Piano and Lake Lugano. Not to be missed!! Take the trail on the left side of the rifugio (facing the building).

Monte Grona (1736m)
From Monte Grona it is possible to admire one of the best views of the Pre-Alps;
Apart from the three lakes Como, Piano and Lugano you can see many peaks of the Alps from Monviso to Bernina.

From Rifugio Menaggio you can walk to the little chapel of Sant’Amate (time 0.45 hr – ascent 240 m) and from there to the top of Monte Bregagno (time 2hrs – ascent 707 m from the rifugio).
Pick up the steep trail behind the Rifugio with the indication “Forcoletta” and “Monte Grona Via Normale”. At the bifurcation Forcoletta-Grona/S. Amate take the right towards S. Amate. The trail ascends along the mountain slope around the Val Pessina till you reach the grassy mountain ridge. From here you will descend to the saddle of S. Amate where the chapel of S. Amate stands.
The spectacular view embraces Lake Como, the wood and pastures of the Val Sanagra, Lake Lugano and the Alps. From the chapel, following the trail sign, you can return to Breglia. The trail runs along the side of the mountain towards a little saddle called by the locals “el capel de Jiovan”, (the hat of Giovanni). From here the trail leads down and meets the path you followed previously from Breglia up to the rifugio Menaggio. For those who wants to climb up to the top of Monte Bregagno, from the chapel follow the steep grassy mountain ridge. You will reach 1905 m altitude and you have to descend to a saddle where the last climb to the rounded top of Monte Bregnano starts.
The view on Val Albano and the northern end of the lake is extraordinary.